started a topic about 5 years ago 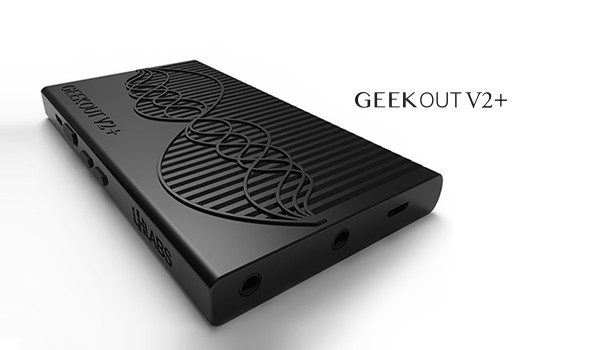 Geek Out V2+ takes the cutting edge technology that we've developed for the Geek Out V2 and puts into an ultra portable, battery powered, multi-platform unit.  Just like it's little brother, Geek Out V2+ is the master of adaptability. Leveraging its own dedicated 3100mAH Lithium-Ion battery power supply, we've designed it to be compatible with iOS (with Apple Camera Kit), Android Lollipop 5.0 & USB 2.0 audio class compatible devices without draining your source devices power.

Geek Out V2+ is a Problem Solver

Problem - If you're a high resolution music lover, a majority of audio devices can't play any higher resolution than standard CD (16/44.1). That sucks!

It's a digital to analog converter (DAC). Our ears can't hear anything that's digital; digital signals have to be converted into analog form before we can hear them. DACs are everywhere: in your phone, in your TV, in your laptop or any other audio playing device. The problem with those DACs is this: they suck. Geek Out V2+'s DAC doesn't suck.It's high definition. Geek Out V2+ can play any current or anticipated audio format and decodes digital files with resolutions as high as 32 bit/384 kHz PCM and 1 bit/5.644 MHz (DSD 128).

Problem - Standard headphone output isn't powerful enough! If you're in a crowded place, like a coffee shop, it's often hard to hear-- even with your music cranked to 11.

It's a headphone amp. Ever wish you could turn up the volume on your music just a little more? Well, Geek Out V2+'s amplifier is up to 10 times more powerful than the headphone amplifier typically used in audio devices. That means you can really crank this sucker up. Not only is it louder, it's clearer and has dramatically more bass.

Line out feature. Geek Out V2+ has a line out feature allowing you to simply plug into whatever audio source you desire and instantly hear the difference with higher quality sound and clarity.